The Mars is set and forget trading system that employs multiple independent grid sequences of orders in trading against retail break-out trading logics on the specific liquidity levels. The EA is monitoring the breakouts of the levels in the oversold and overbought areas where the FOMO retail traders enter the market after confirmation as it’s taught in every stupid trading book. When this situation occurs EA trades against these retail positions with the targets to stop loss clusters (liquidity zones) below/above swing lows/highs where mostly their stop losses are placed.

I’m sure that every one of us has ever tried manual trading. We all bought some trading books in the beginning or spend money on some trading courses, where mostly the same rubbish is taught. 95% of authors who wrote the books, are great teachers and very good at explaining on charts hindsight, showing where you should buy and where to sell. Easy :), isn´t it?

Well, if it’s as simple as in the books, then we all would be billionaires already. Markets and especially the Forex market are highly manipulated by large speculators and driven by central bankers’ IPDA (Interbank Price Delivery Algo). Currencies are the products of central banks, and they dictate the price, no matter how much any groups buy or sell. IPDA deliver price where it’s needed and where it does business. IPDA is constantly seeking liquidity which can be in the form of stop losses of retail traders. That is actually great because by understanding retail traders’ behaviour we know where the liquidity is and where the IPDA will most likely take the price next. The worst entries to the markets mostly have break-out traders and that’s what The Mars EA trades against with a little help from the grid.

How is liquidity created?
I have highlighted the levels where are mostly the breakout traders entering the markets and mainly where they place their stop orders. (Markets Structure Picture Below)

1) Break of the consolidations, break out traders entering the market and they put their SL below the last swing low.
2) After the price breaks and pullbacks back to the old high. Another group of traders is entering with SL bellow swing lows as they learned in the books.
3) Break of the old high, brings another group of traders who are entering the third wave again. They put stops below the latest or previous swing low.
4) Totally worst entry has FOMO traders who see the market flying and they want to catch it, these mostly enter on the top/bottom of the mean reversal.

This behaviour of the traders which places their stops to similar zones below swing lows creates stop loss cluster = Liquidity. Now Large speculators are not looking for our stops, because they would like to destroy us, but they need to fill the order. The stop losses of buyers are actually a sell stop. Large speculators need someone to sell so they can buy, that’s why the price very often drops to these liquidity zones before the expansion move and that’s the market movements in which The Mars EA wants to participate with multiple positions and targets to the liquidity zone. 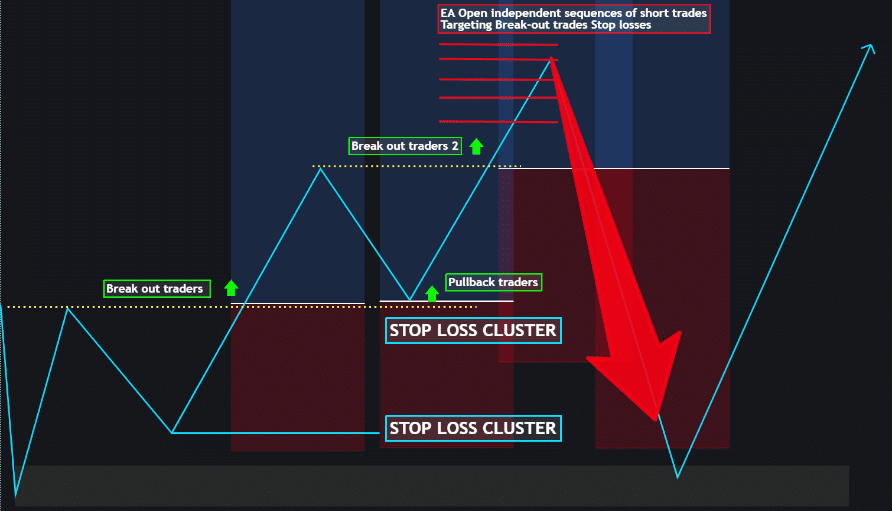 As you can see two breakouts with new highs induced 3 groups of traders to enter the market, but they are entering late or too early (before the liquidity loaded). This is a disadvantage of break-out trading. I don’t say it’s not working. But mostly if break out is close to the daily ATR high/low levels it’s fake. And trading against break-out systems gives more probabilities and profitability in long term. The Mars EA takes these advantages with multiple independent grid sequences of orders to target the groups’ Break out systems.

In the picture below you can see how the EA is placing the trades once the price breaks new highs in the overbought conditions above the daily ATR and in the pre-determined liquidity levels. Which we can adjust in the EA settings. For better understanding, I recommend running visual backrests. 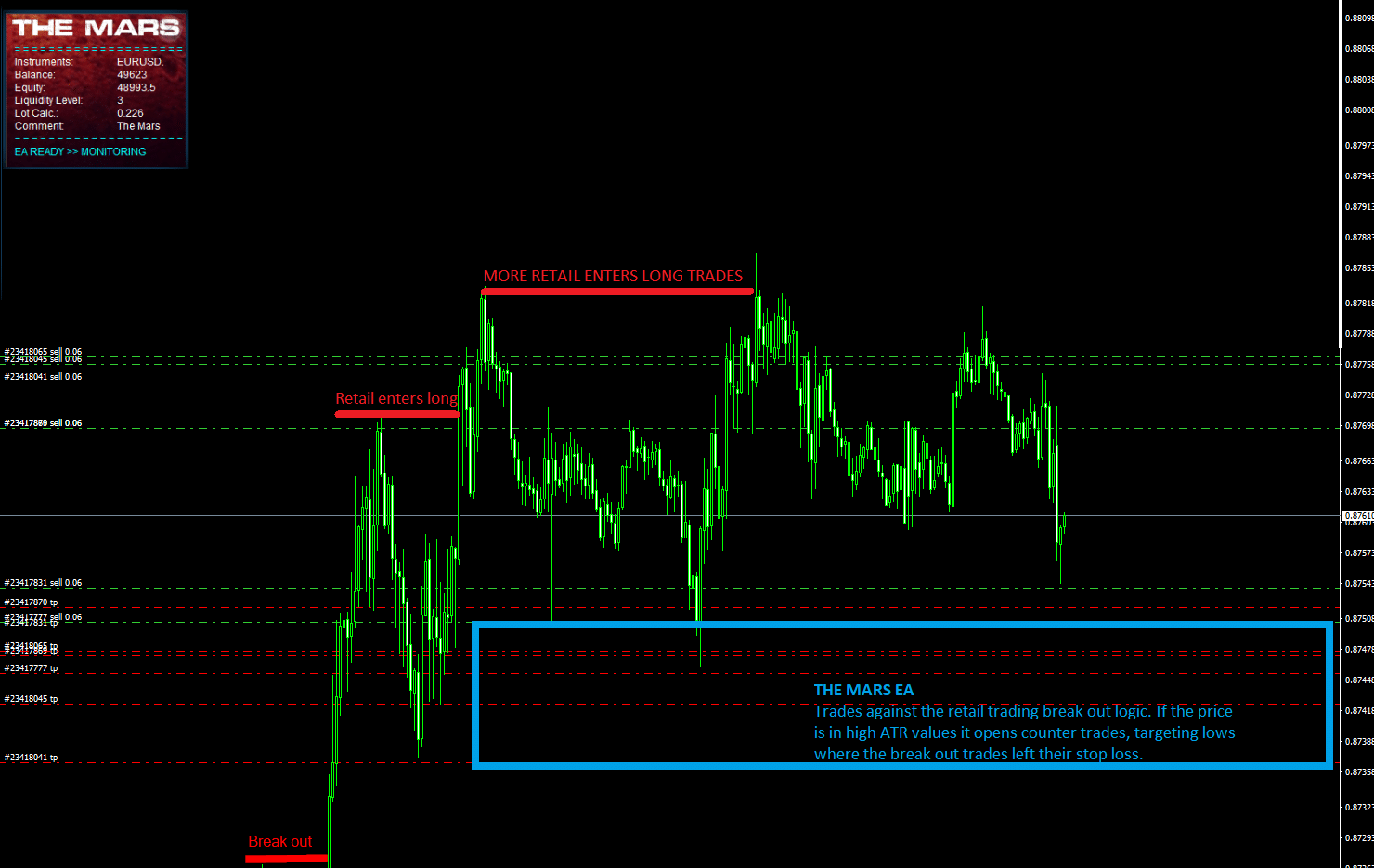 Liquidity Entry Levels
As already mentioned, The Mars EA trades against the breakout traders, but it has to be in oversold /overbought conditions which are filtered by the ATR and mainly by the IPDA ranges 60 trading days back in the levels — Previous Day’s H/L, Previous Weeks H/L, Previous Months H/L and its equilibriums adjusted to the NY time. Because the new day starts at NY Midnight time and not as what most MT4 brokers have as their daily close. By re-adjusting this we get completely different views of the market, but you don’t have to worry about this and your broker time, it’s coded in the system. The important thing to understand here is the following trading logic, which I will explain on bullish market structure (The same logic applies to bearish scenario)

More waves of break out mean more inducements and more traders in the markets means bigger stop loss clusters (liquidity) below swing lows. We know that after inducement the manipulation will most likely come, but the FX market is not centralized and we don’t know if the volume in stop loss clusters is already big enough for large speculators to fill their orders. We can speculate that manipulation will start on specific levels, but we really never know when. That’s why the EA employs the sequences of trades in the grid to average our entry and diversify the targets. We do not want to have just a stupid grid that adds positions with some predefined pips gaps so we can set the efficiency of the EA for entering specific liquidity levels. Which gives different probabilities and accuracy as you can see in the variable 10 years backtests. Note: this is the Grid / Martin EA it can have a large DD.

EA trades only from the Liquidity level 3, its implemented in the predefined settings, but just for the explanation 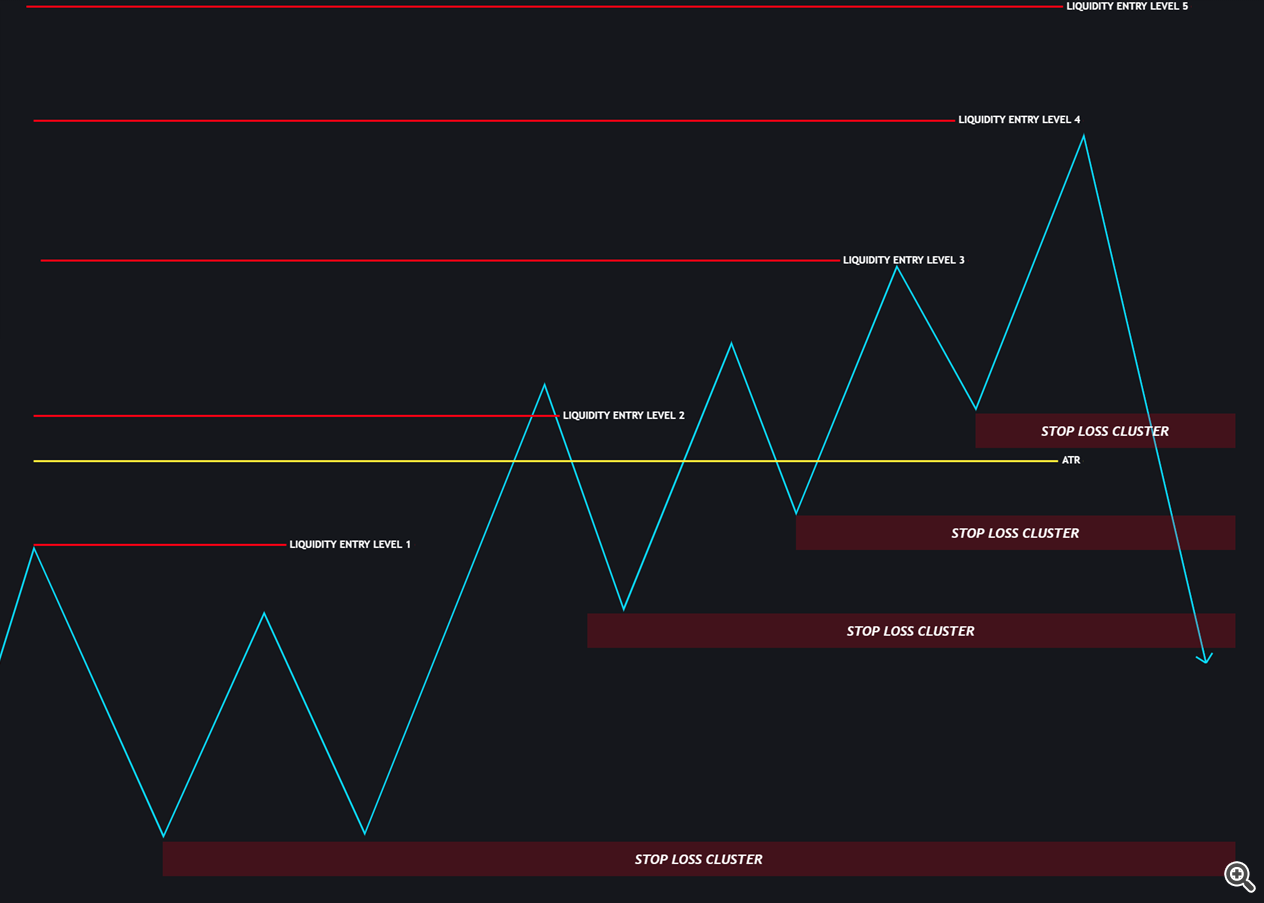 Commodity Portfolio
The Mars is a very flexible system that can trade on most of the FX pairs, but the most stability it delivers on the commodity pairs triangle AUD/NZD/CAD. These three correlates together (see picture below). There are only a few situations during the year when some of the currencies move faster than others against the USD. But these commodity pairs always go together. So basically, trading just a triangle of these three – AUDNZD, AUDCAD, NZDCAD is enough to be profitable with relatively low risk and make stable gains every month with a minimum capital of $1000. You can check 👉 THE MARS EA LOW-RISK performance on approx. $10K USD account. The same % gains with low risk are possible to achieve with a $3000 account. Commodity portfolio can be traded on $500 with special settings (shared on the bottom) but it’s High-Risk trading as I run here 👉 THE MARS HIGH RISK.

I do now want to give financial advice, but if you don’t have at least 5K capital, you should better use a cent account, EA will serve you much better due to the more precise lot sizing and faster accumulation of profits. Better on the cent than on a classic account where you must run high risk especially if you want to use the full potential of the EA. 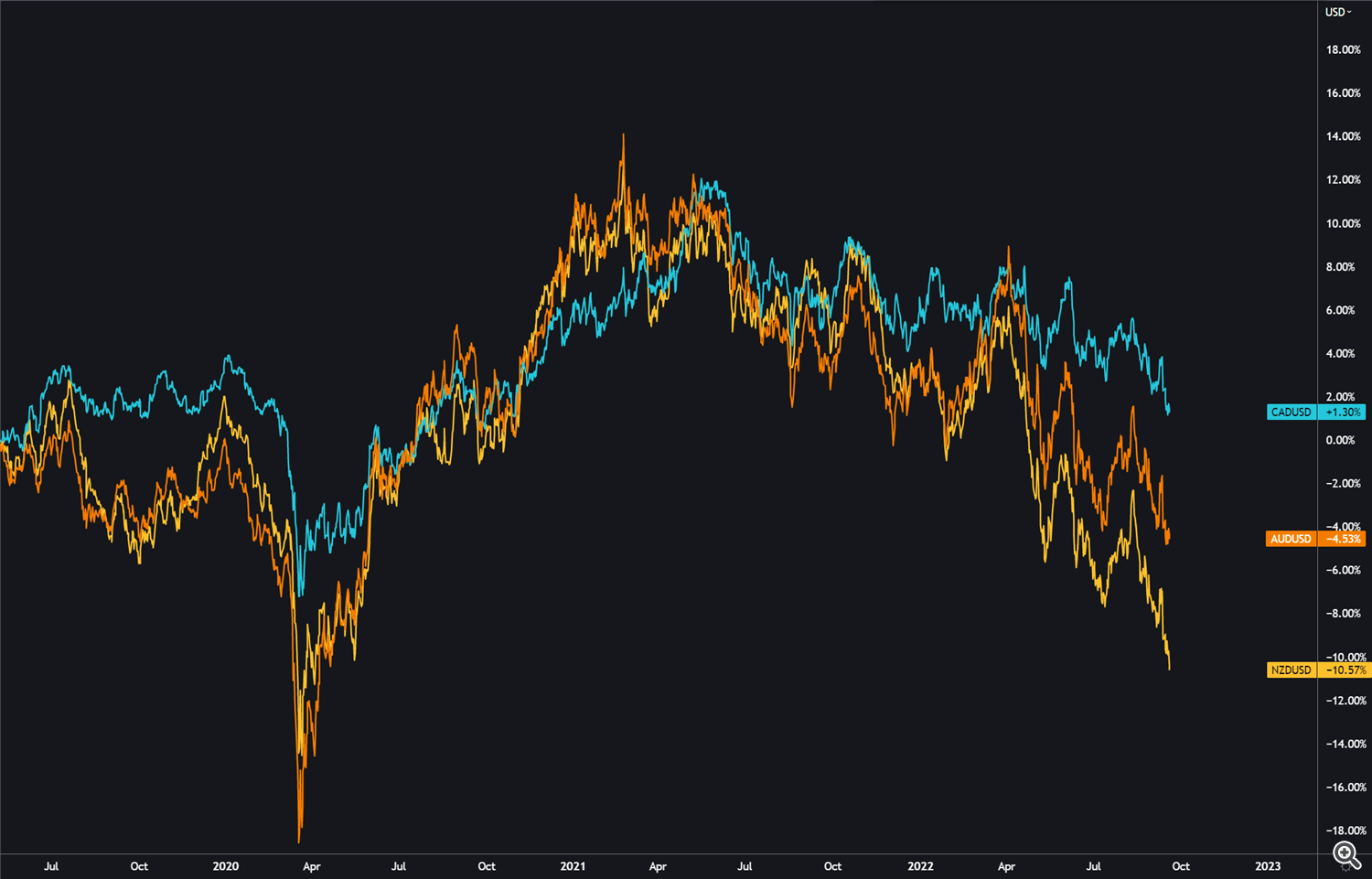 Capital Guard
For securing our accounts I have to implement capital guard protections, which have a couple of settings that don’t allow to happen drawdown on all the pairs at the same moment or close all positions and stop trading when X% DD occurs in case of the black swan event.

In December 2022 – AUDNZD crashed over 800 pips without a pullback. Yes, these situations are dangerous for this EA. On the equity below you can see how the EA closed a loss lower than 30%. Capital guard settings are up to you. But have in your mind that if you lose more than 50% then you need a 100% gain to recover and it can take more than 6 months.  So I’ll rather lose  30%  with capital guard and start over. Yes, it’s painful but better than loose capital completely. EA will most likely recover the loss in a few months and the year can still end with more than average profit. 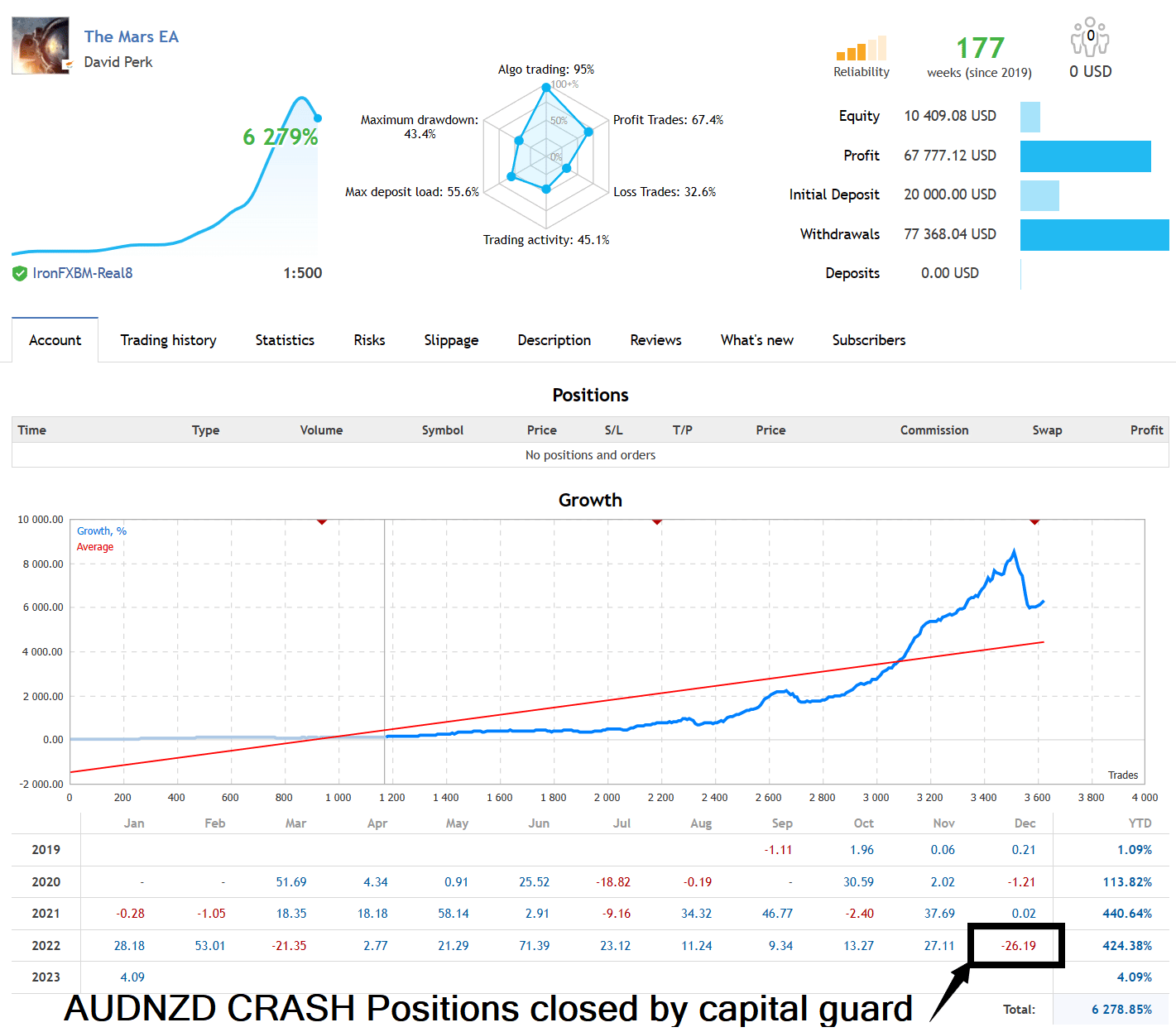 What to expect?
First of all, this is not a quick-rich EA. But based on my Live results and backtest you can get a stable partial income. In my opinion, the backtest really never mirrors the real trading conditions, so I better calculated with deviations to 15% higher drawdown and 15% lower profits than what’s the outcome of the back tests.

Based on a 10-year backtest for the basic commodity portfolio. With most two optimal settings performed an average yearly profit of  79 – 186% with, a max drawdown of 35% in the extreme conditions for the single pair. Which is amazing results. It’s of course not guaranteed that we will get the same results in the future, but the statistical edge is only what we have as traders.

The Mars Secure margin drawdown function doesn’t allow the drawdown to happen at the same moment on all pairs. My calculations for the worst-case drawdown with an optimal portfolio would be below 45%. So, with relatively conservative settings we can expect between 5 -10% monthly average with the usual drawdown of 15% and our worst drawdown should not exceed 45%.

On the tab below you can see 10 years of backtests of the single pairs with the different auto lot settings. On the right side of the tab are the calculated average yearly profit and drawdowns.

* This is the backtest based on the 10 years of history. Note that the world is in a recession. The market can behave differently.

Installation
All the settings mentioned above were implemented to the EA and the only thing you need to do is to pick up what fits you most. If you need help you can of course contact me anytime but remember. I’m not a financial advisor. I only provide the tool that serves me well and based on the probabilities it could continue to do so in the future. 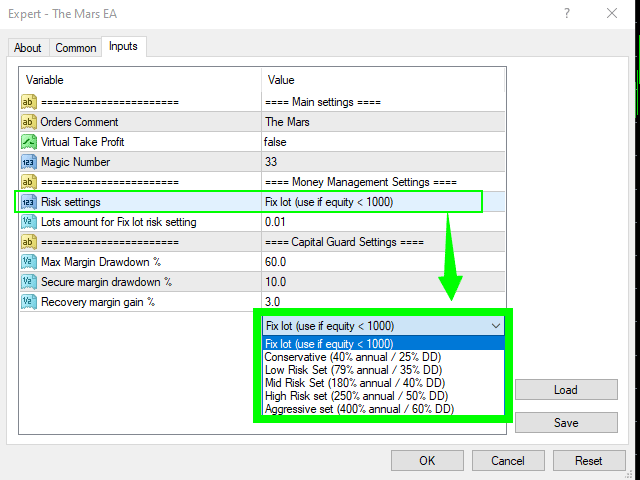 The main advantage of trading with expert advisors is that it eliminates emotional-based decisions and mistakes which we could do as humans. Don’t be greedy, do regular withdrawals and this tool will make a nice income for you. 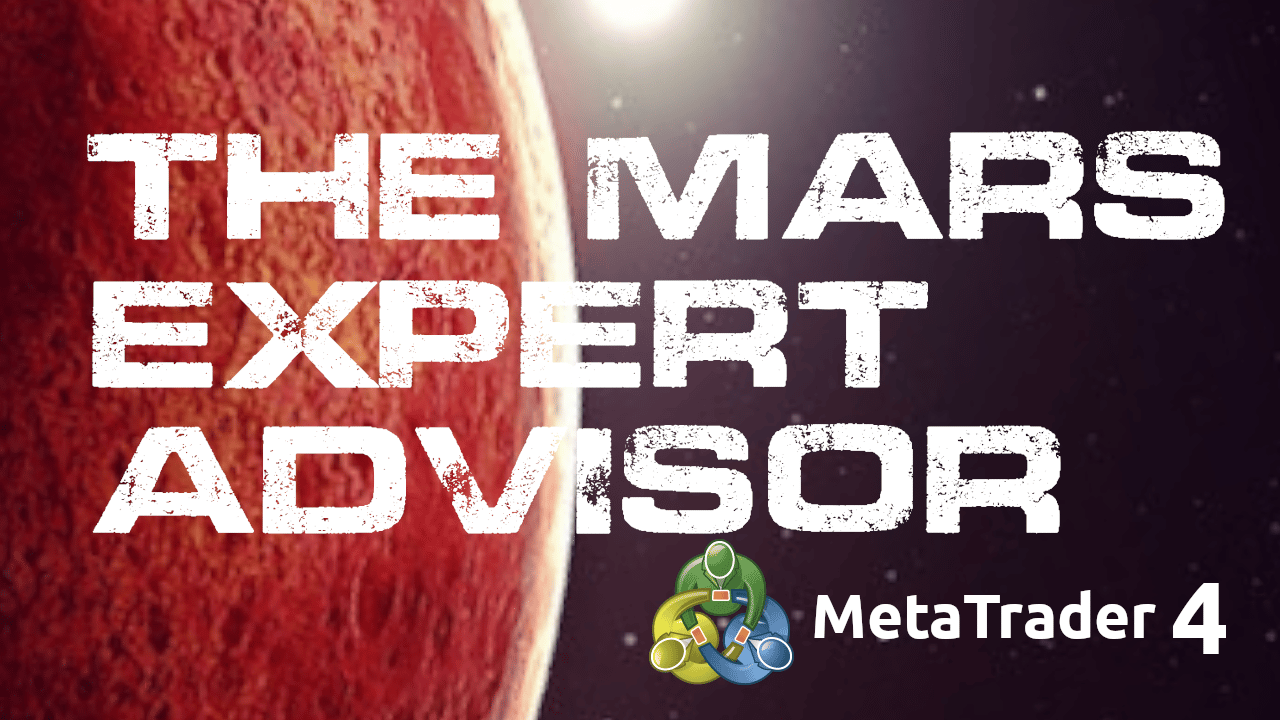 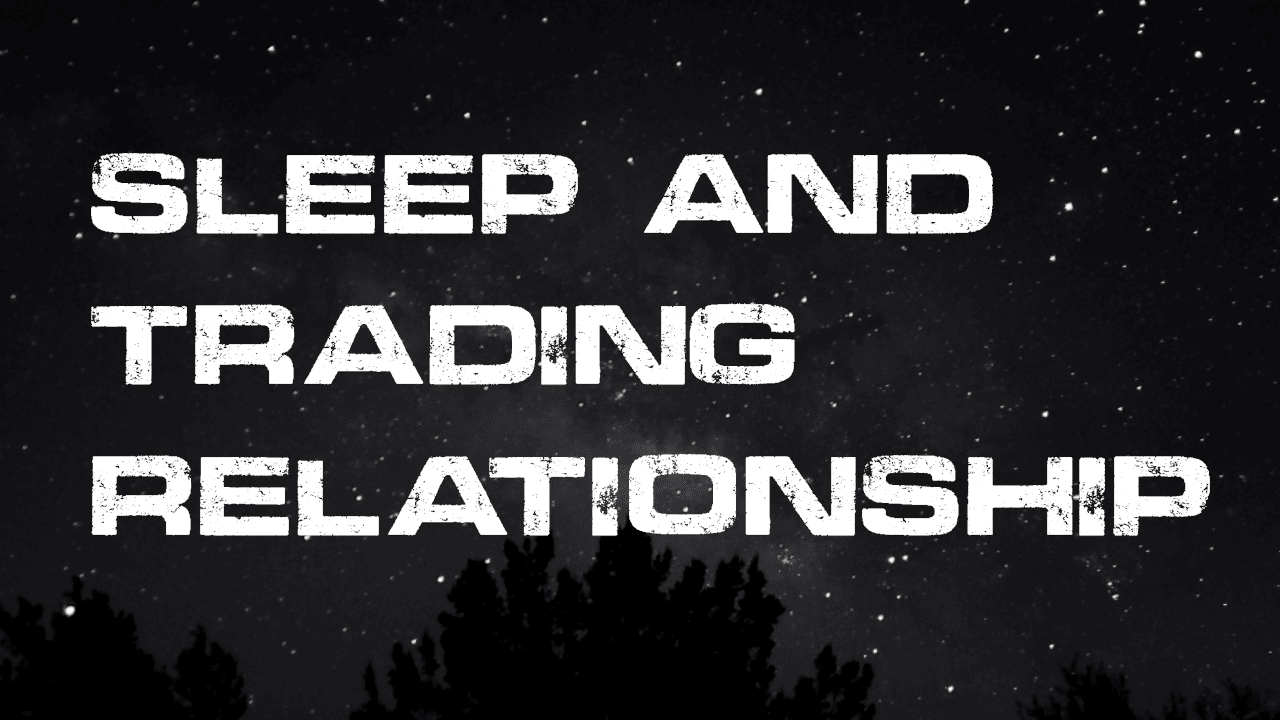 Article by the great trader – 🐦DoerXbt Like most representatives of free professions and business, a trader rarely lives according to a measured schedule. Most 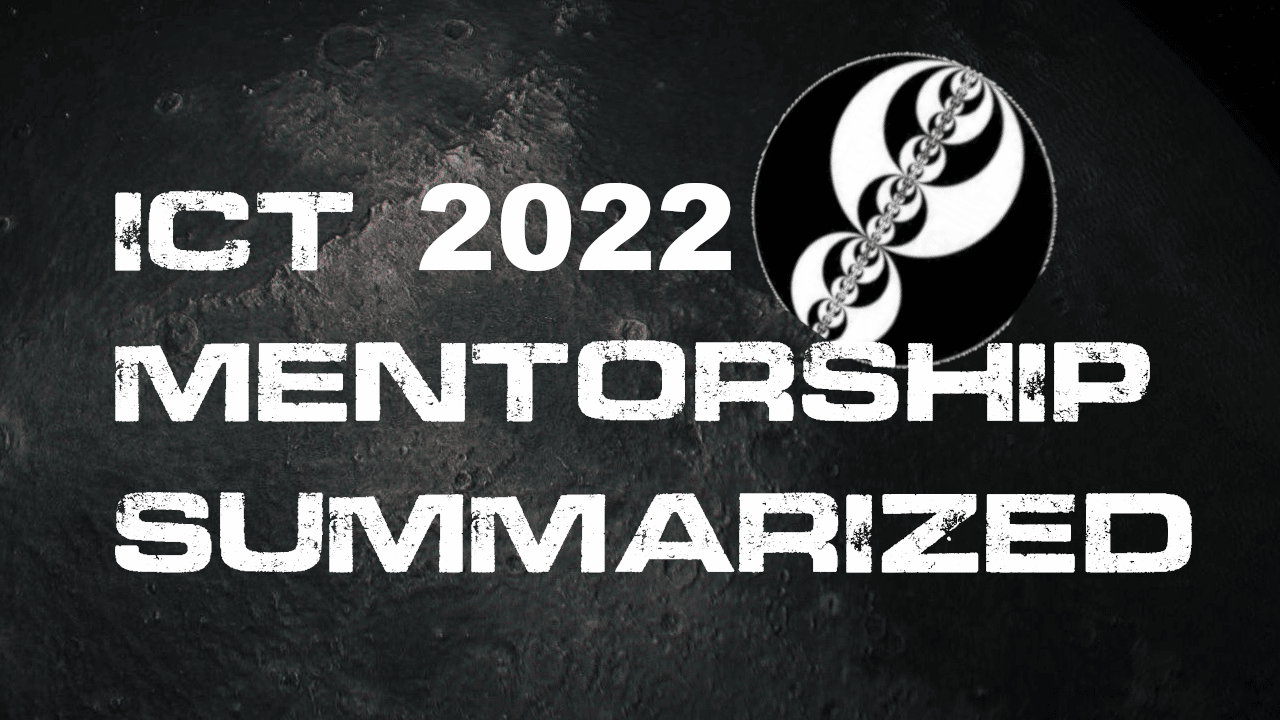 The prices of markets are controlled by AI-driven algorithms based on the elements of time and price. Price always seeks liquidity and to rebalance inefficiently 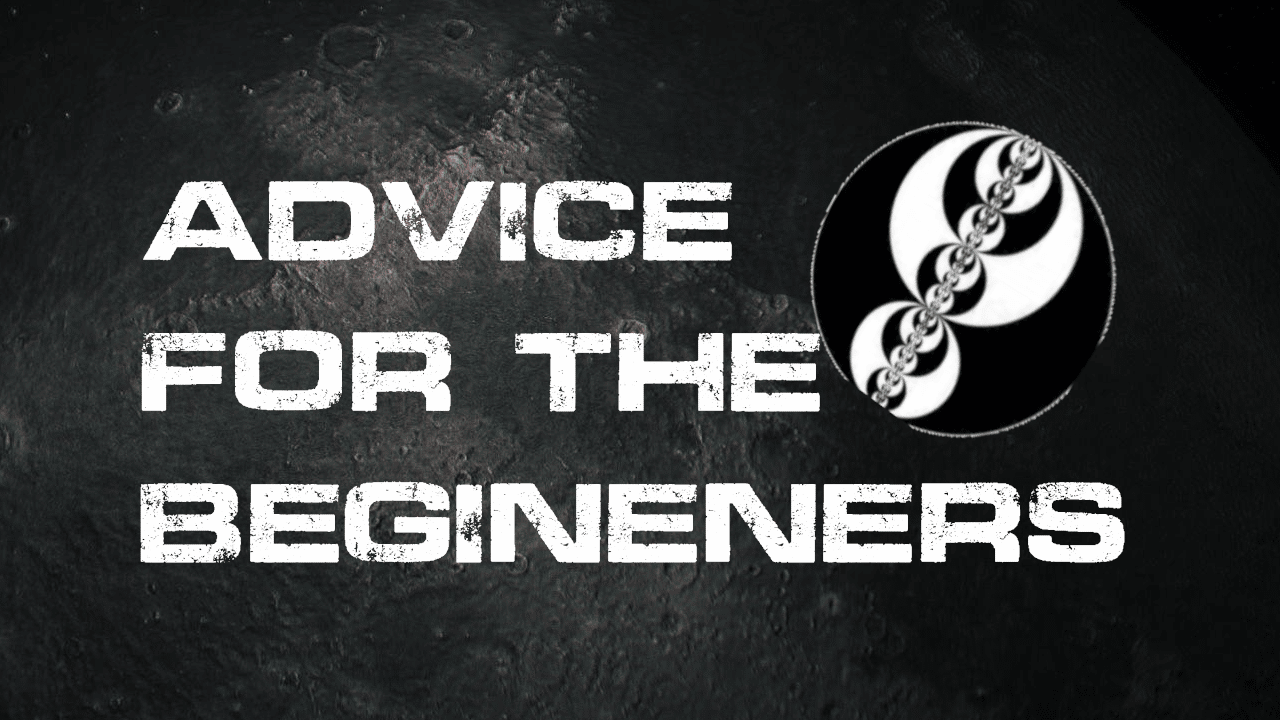 ICT Advice for the beginners traders

1. Don’t tell to anyone Don’t ask or seek approval from family, friends, and co-workers. No one will support you Contrary once they will see 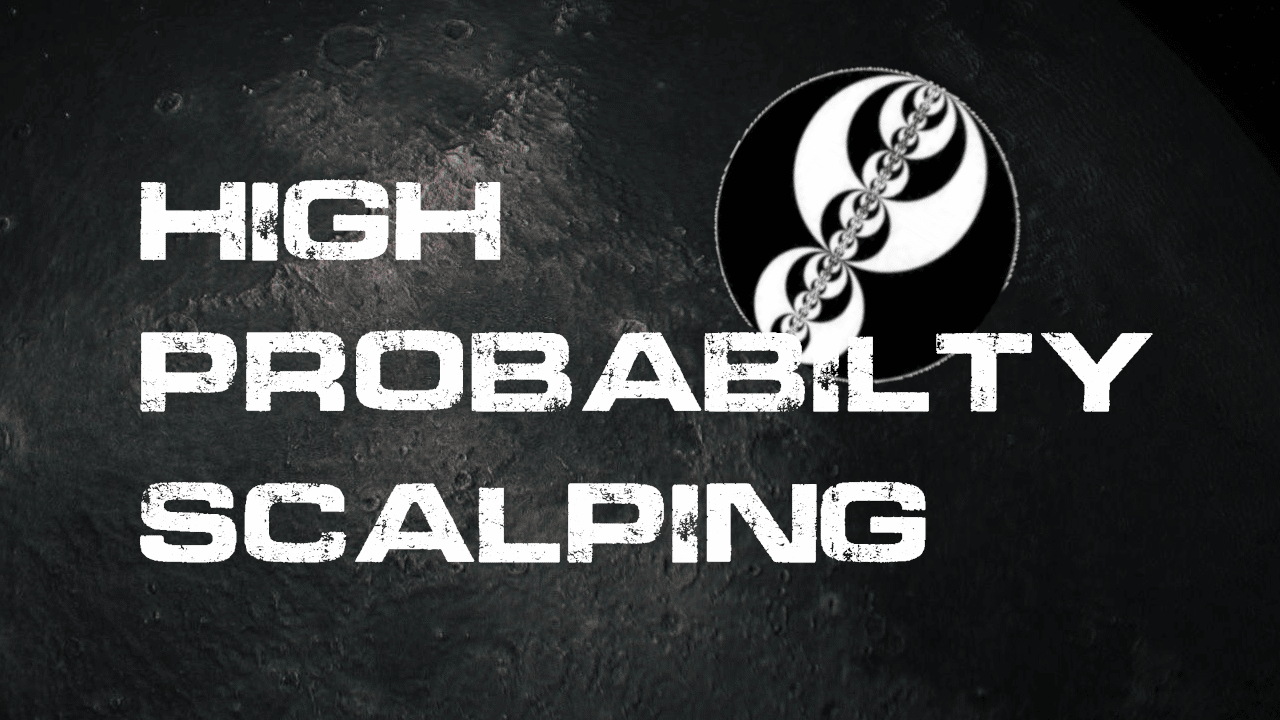 What are high-probability scalps? Focus: Highlighted opportunities in scalping the forex Learn directional bias for HTF institutional sponsorship Determine the highest probable times of the

Read More »
Manage Cookie Consent
To provide the best experiences, we use technologies like cookies to store and/or access device information. Consenting to these technologies will allow us to process data such as browsing behavior or unique IDs on this site. Not consenting or withdrawing consent, may adversely affect certain features and functions.
Manage options Manage services Manage vendors Read more about these purposes
View preferences
{title} {title} {title}